Can you even remember the days of being “just” a finance guy? If you can’t, it’s no surprise since those days seem to have gone the way of the dinosaur.

Just in the last week, I’ve read numerous articles that speak to the expanding role of the Chief Finance Officer.

CFO.com, in its article about holding the CFO and CEO role simultaneously points out …

Daily Journal CEO Gerald Salzman is also the firm’s president, CFO, treasurer, assistant secretary and principal accounting officer, as well as a member of the board. “How one man can do all these jobs by himself is beyond me,” Weil wrote. “Usually the CFO reports to the CEO. Here he’s the same person.”

CGMA Magazine just released data on the trend I’ve been noticing for the past couple of years … the elimination of the COO role as it morphs into an expanded Chief Financial Officer role.

Just 35% of Fortune 500 and S&P 500 companies employed a COO last year, according to executive search firm Crist|Kolder Associates’ Volatility Report 2013. That was down from 39% in 2012 and is the lowest percentage since at least 2000, when 48% of companies in the survey had a COO. 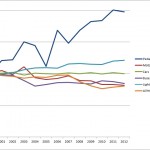 What can you take away from these evolving and growing statistics?

–   Those Finance Chiefs with broader skill sets than those of pure bean counters will remain the more marketable candidates of the future.

–   There has never been a better time for the operationally-focused Chief Financial Officer, with his sights set on the Chief Executive Officer seat, to make his move. After all, he is already the Chief Everything Officer, right?

Your information will be kept
confidential and never rented,
sold, or given away.